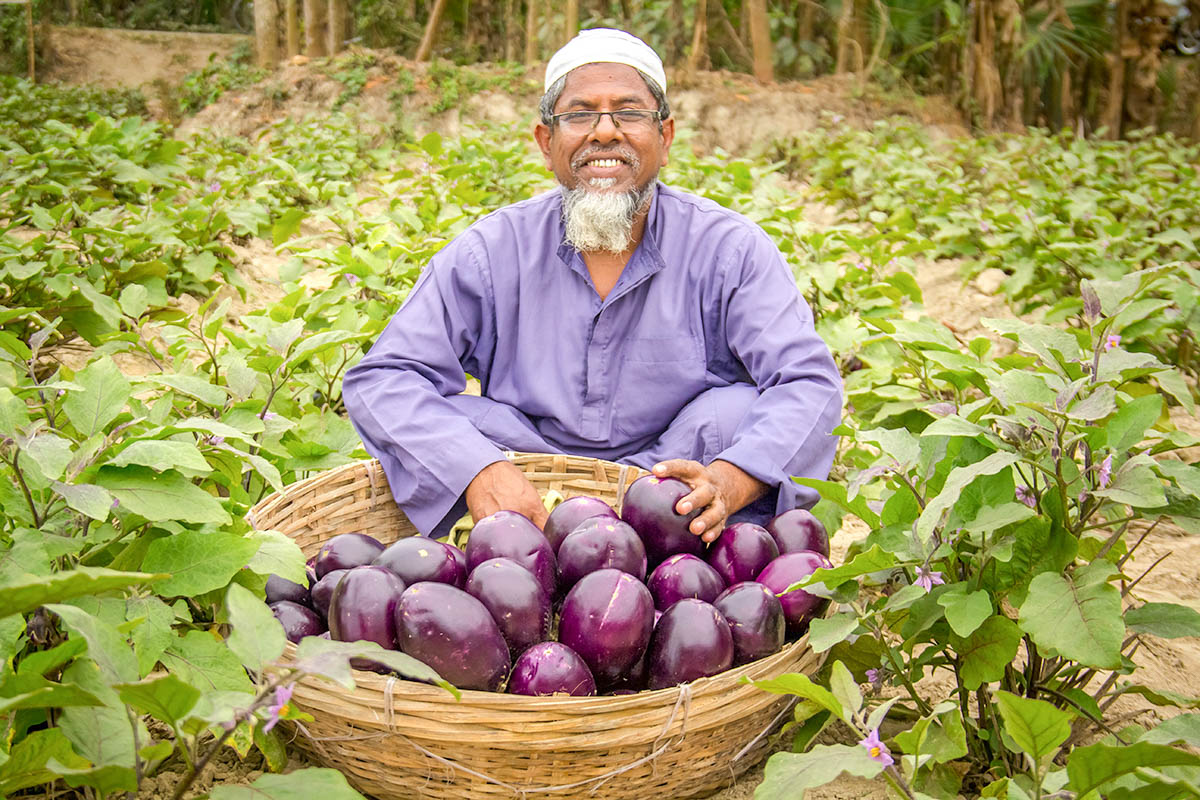 A new study confirms that genetically modified pest-resistant eggplant (Bt brinjal) has successfully reduced pesticide use and improved livelihoods among the Bangladeshi farmers who grow it.

Conventionally grown brinjal is one of the most heavily sprayed crops in South Asia. Historically, brinjal farmers have sprayed as many as 84 times in a growing season to protect their crops. This prompted scientists at the Bangladesh Agricultural Research Institute (BARI) to develop a pest-resistant variety as an alternative to insecticide use.

The study, prepared for the US Agency for International Development (USAID) by the International Food Policy Research Institute (IFPRI) with support from BARI and Cornell University, found that Bt brinjal has met that goal. It documented a 39 percent reduction overall in the quantity of pesticides used and a 51 percent reduction in the number of times that farmers applied pesticides to their brinjal crop.

Though an earlier study found that Bt brinjal confers almost total protection against eggplant fruit and shoot borer (FSB), the crop’s most destructive pest, farmers are still using some pesticides to control other harmful insects.

Though Bt brinjal was engineered specifically to resist the FSB, it also helps to reduce infestations of other harmful insect pests, the study found. Populations of harmful leaf-eating beetles, mites and mealy or leaf wing bugs were lower in Bt brinjal than the non-Bt varieties.

Other studies are currently under way to identify ways of controlling some of the crop’s secondary pests, such as mites and white fly, so that brinjal farmers can further improve their gross returns and minimize insecticide use.

This is significant in Bangladesh, where the average annual household income per capita was just $600 in 2016, the most recent year for which figures are available.

“This study confirms previous studies showing that Bt brinjal can achieve its main aim, which is to improve the livelihoods of smallholder farmers in a developing country while also protecting the environment by reducing insecticide sprays,” noted Dr. Anthony Shelton, a Cornell University entomologist and principal investigator of the USAID-funded, multiple-year project, Feed the Future South Asia Eggplant Improvement Partnership.

The partnership is a collaboration between USAID, Cornell University, BARI, the Cornell Alliance for Science and the University of the Philippines at Los Banos, which is preparing to submit a regulatory dossier to support commercial cultivation of Bt brinjal so farmers in the Philippines can enjoy similar benefits.

Bangladesh was the first country in South Asia to approve commercial cultivation of a genetically engineered food crop. Smallholder farmers have rapidly adopted Bt brinjal, from just 20 when it was first introduced in 2014 to more than 27,000 across all districts of Bangladesh. The IFPRI study was conducted in 2017-18 and involved more than 1,200 farmers in the Rangpur and Rajshahi divisions.