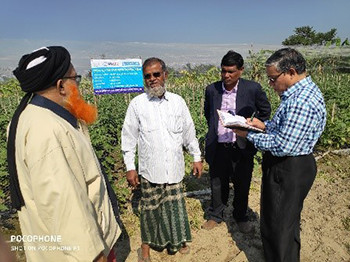 Abdul Hossain, a brinjal growing farmer from Rangpur district of Bangladesh, is into his second year of enjoying the benefits from the cultivation of Bt brinjal in his one-fourth acre of land. In 2017 – 18, Abdul planted Bt brinjal for the first time in his fields and earned US $1675 by harvesting and marketing 10471 Kg of BARI Bt brinjal – 4 variety. This year his fields look very well managed and promise huge yields. He is excited and looking forward to harvesting an even higher amount of Bt brinjal fruits. With a higher market price of brinjal this year, he is expecting significantly higher earnings than last year. In the first harvest of the season, he has already reaped 569 kg’s of fruits.

The success of the technology is reflected in the socio-economic impact realized by farmers like Abdul. Bt brinjal has gotten off to a good start in Bangladesh with increased yearly adoption and very favorable socioeconomic benefits. Studies conducted by Bangladesh Agricultural Research Institute (BARI) during the On-Farm Research Division (OFRD) trials of Bt brinjal indicate that performance of Bt brinjal is far superior to non-Bt brinjal, with negligible fruit infestations in Bt brinjal compared to 45% in the non-Bt brinjal.  Farmers have realized net returns to the tune of US $2,151/ha for Bt brinjal per hectare as compared to $357/ha for non-Bt brinjal, a six-fold increase1. Farmers are reported to have saved at least 60% on pesticide cost2 compared to non- Bt brinjal farmers.

Since its commercialization, BARI has been the sole producer of seed for the four approved Bt brinjal varieties, but has recently provided breeder seed to the Bangladesh Agricultural Development Corporation (BADC) to further increase seed quantities. BADC’s seed production officers of Bangladesh expressed their excitement with the enormous volumes of Bt brinjal seeds produced from the fields, compared to the non-Bt brinjal varieties.

Bt brinjal seed producers from the Rangpur Seed Production farm of BADC have planted BARI Bt brinjal – 2 in about half an acre of land and are expecting more than double their target seed production. Even though Bt brinjal seedlings of BARI Bt Brinjal-1 were planted late in the Regional Research Station at Burirhat, Rangpur, they are expecting 10 Kg of seed from one-sixth acre (16.5 decimal) of land. 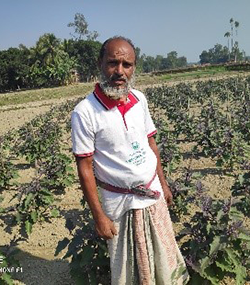 Rafiqul Islam Fakir from Rangpur district was inspired by scientific officers and assistants of OFRD, BARI and shifted to Bt brinjal cultivation in 2017. He has benefited tremendously financially. Thrilled with the huge benefits, he is not only excited to continue Bt brinjal cultivation but has started motivating other brinjal farmers to shift to Bt brinjal cultivation. Rafiqul started to grow Bt brinjal seeds in his fields to increase availability of seedlings in his area. Already he has harvested about 9000 seedlings from the 1200 seedlings of BARI Bt brinjal planted in his fields. Rafiqul has earned an additional US $90 by selling these seedlings to 5 farmers from his locality at US$ 10 per 1000 seedling. This year, he is looking forward to harvesting huge volumes of fruits of BARI Bt brinjal – 2 planted in one-fourth acre of land. Farmer’s like Rafiqul are not only enjoying the benefits of the technology, but are taking the extra effort to spread the technology among other farmers. 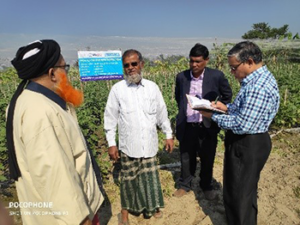 The Bt brinjal controls the brinjal fruit and shoot borer (BFSB) without the need for supplemental sprays to control it. Nevertheless, a few additional sprays are needed to control insects like thrips, aphids and other ‘sucking insects’ that are not susceptible to the Bt protein produced by the plant. Studies have shown that such sprays are only needed infrequently. However, another pest also not controlled by Bt brinjal is the bacterial wilt disease which lingers in many of the soils in Bangladesh. Bacterial wilt is best controlled by using plants that are resistant to the disease.   Increased incidence of bacterial wilt in the last few years caused the three brothers (Proshanta Chandra Sarker, Santosh Chandra Sarher and Sangkar Chandra Sarker), from a brinjal growing family of Rangur district, apprehensive to continue with brinjal cultivation. Wilt infection in the brinjal fruits has significantly reduced the fruit yield and the earnings of the farmers. This year the scientific team of BARI grafted Bt brinjal seedlings onto bacterial wilt resistant brinjal varieties. These grafted Bt brinjal seedlings control wilt incidence and the brinjal fruit and shoot borer, thus contributing to enhanced returns for the farmers. Encouraged by scientific officers of BARI, the three brothers were excited to cultivate grafted Bt brinjal. All three of them planted grafted Bt brinjal seedlings along with non-Bt brinjal plants in three different plots. They were excited to see the promising performance of the grafted Bt brinjal fields as compared to their counterparts and are looking forward to much higher yield and returns from the grafted Bt brinjal fields.