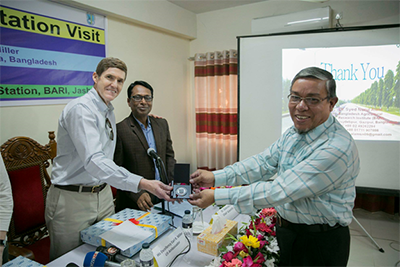 The US Ambassador to Bangladesh congratulated the nation on moving forward with genetically modified food crops after viewing a demonstration plot growing pest-resistant Bt brinjal (eggplant).

“I’m pleased the [Bangladesh] Ministry of Agriculture and other bodies are working so hard to educate farmers and looking at ways to mitigate this pest, including by expediting registrations of new products – especially biological control products – to help farmers,” said Ambassador Earl R. Miller after seeing plantings of brinjal (eggplant) genetically engineered to resist the destructive fruit and shoot borer pest.

Miller was accompanied by his wife, Michele Adelman, USAID Deputy Mission Director Zeinah Salahi and other USAID officials during their Feb. 11 visit to a Regional Agricultural Research Station (RARS), in Jashore, where they met with Bangladeshi scientists and brinjal farmers.

USAID collaborated with the Bangladesh Agricultural Research Institute (BARI) and Cornell University in developing the pest-resistant brinjal under the Feed the Future Bangladesh project. It was the first GM good crop approved for commercial use in South Asia, making Bangladesh a regional pioneer in agricultural innovation. Adelman, a Cornell alumnus, was delighted to see the university’s logo at the research station.

The Bangladeshi government approved four Bt brinjal varieties for release in October 2013, and first distributed seeds to 20 farmers in four districts in January 2014.  Adoption has increased dramatically since then, with more than 27,000 farmers now growing Bt brinjal across all districts of Bangladesh.

A recent BARI study, published in PloS One, confirmed that farmers could earn higher economic margins on Bt brinjal than on conventional varieties, due to reduced insecticide sprays and increased yields.

The delegation also toured key USAID agriculture, labor and food assistance programs in Jashore and Khulna, including field trials of GM maize, where the Millers expressed keen interest in the devastating impacts of fall armyworm and the ability of GM maize to resist the pest.