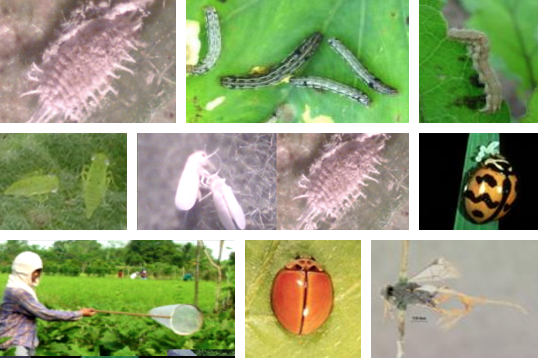 The first-ever field level study of the effects of insect-resistant genetically modified Bt eggplants on non-target arthropod species, carried out in the Philippines by researchers from the University of the Philippines Los Baños (UPLB) working with Cornell University, has been published in the prestigious open-access scientific journal PLOS One.

The data, collected over three growing seasons in the Philippines’ main eggplant-growing region of Pangasinan, shows no significant differences between the number of insects and other arthropod individuals and species between the genetically modified Bt and non-Bt control eggplants.

This finding that genetically modified Bt eggplant has no negative impacts on the biological diversity of non-target organisms is consistent, the study authors point out, with previous studies on insect-resistant Bt crops such as cotton and corn. The paper is entitled “Assessing Potential Impact of Bt Eggplants on Non-Target Arthropods in the Philippines” and was published on Oct. 31, 2016.

The corresponding author of the study, which was subjected to PLOS One’s rigorous scientific peer review, is Dr. Desiree Hautea, professor of crop biotechnology of UPLB’s Institute of Plant Breeding, College of Agriculture.  “This first published report from extensive field studies of Bt eggplants affirms that the technology is ecologically benign,” Hautea asserted.
Study co-author Dr. Anthony Shelton, international professor of entomology at Cornell University, welcomed the publication of the results. He commented: “This study confirms the environmental safety of Bt eggplant to non-target organisms under field conditions in the Philippines. Our previous study, published earlier in the same journal, documented the effectiveness of Bt eggplant against the destructive eggplant fruit and shoot borer. Combined, these studies clearly document the benefits of Bt eggplant to growers, farm workers, consumers and the environment.”

The study was funded by USAID, with match funding provided by the University of the Philippines Los Baños and the Philippine government’s Department of Agriculture Biotechnology Program Office (the funders had no direct role in the study, however). The eggplants used were varieties (purple, long fruits) preferred by Filipino farmers and consumers, with the Bt gene crossbred into them from an original transformation event carried out in India by the seed company Mahyco, which donated its genetic technology to the project. The field trials were carried out between March 2010 and October 2012.
Bt eggplant could be of significant benefit to Filipino farmers and consumers, the study authors suggest, because conventional eggplant is typically sprayed with insecticide up to 72 times during the 180-day cropping season to control infestation by the eggplant fruit and shoot borer (EFSB) pest. Bt eggplant, as a previous study by the same authors has demonstrated, is fully resistant to the fruit and shoot borer pest, so it does not require pesticide sprays to prevent damage by this insect.

Filipino farmers use broad-spectrum insecticides for the conventional control of EFSB, including profenofos, triazophos, chlorpyrifos, cypermethrin and malathion. In contrast, EFSB-resistant Bt eggplant varieties can be grown by farmers as part of a more ecologically-friendly “integrated pest management” (IPM) agricultural system.  Using resistant varieties as a foundation, IPM includes such techniques as sex pheromones for trapping adults and disrupting mating, removing infested plant parts and more selective and sparing use of chemical insecticides. Cornell’s Professor Shelton is an internationally-recognized expert on IPM.

IPM is more ecologically friendly, the researchers state, because “agriculture depends on several arthropod groups performing ecological functions such as decomposition, pollination and biological control that are essential to soil health and crop productivity.” Broad-spectrum insecticides kill a wide variety of these non-target arthropods, reducing the useful ecological functions they are able to perform and harming overall biodiversity in the field.

The PLOS One paper concludes:
“Farmers would gain profits because the technology would reduce EFSB damage, increase the marketable yield and lower production costs. Consumers would have an adequate supply of safer eggplant at a lower price. The adoption of Bt eggplant is projected to greatly reduce pesticide use on eggplant, thereby reducing both pesticide loading in the environment and hazards to farm laborers and consumers. Bt eggplant presents a more efficacious, environmentally benign and profitable alternative to the current practice of intense use of chemical insecticides in eggplant production.”