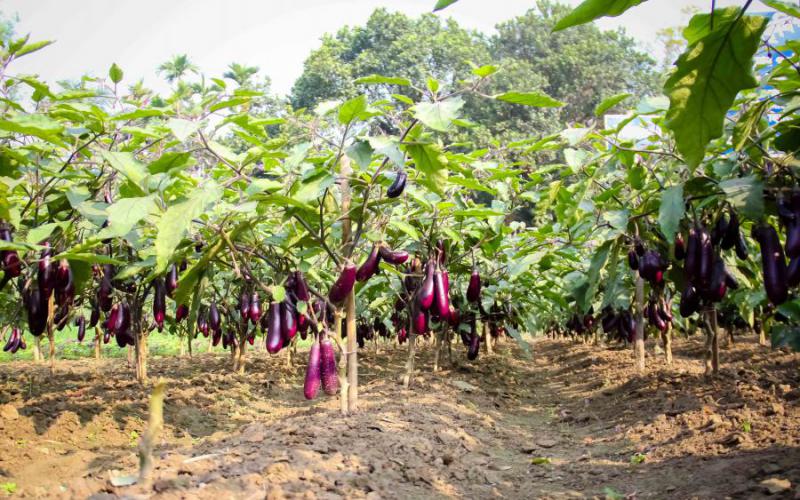 Biotechnology and communication experts from international and national research institutes, universities, government and development organisations emphasized the importance of stewardship and coordinated communication about research and development related to genetically engineered crops in Bangladesh. They met at a workshop jointly organised by the Bangladesh Agriculture Research Institute (BARI), the Feed the Future South Asia Eggplant Improvement Partnership and the Feed the Future Biotech Potato Partnership, held at the Hotel Six Seasons in Dhaka on August 28, 2017.

Dr. Abul Kalam Azad, Director General, BARI, chief guest of the inaugural session chaired by Dr. Md. Lutfur Rahman, Director of Research, BARI, said, “Sometimes communication is easy and sometimes it’s difficult. Many poems are written on one moon by many people so it depends on conceptualisation and perception. The appropriate ways of communication need to be identified and implemented to make the information sharing effective. Today’s Communications Coordination workshop is very useful for Bt brinjal and late blight resistant (LBR) potato as we are working on these two crops.”

Experts shared a number of technical papers and evaluated national and international communication and stakeholder-partnership efforts, including existing best practices for stewardship and biotechnology communications. The organizers aim to foster a more coordinated strategy for research, development and stewardship of genetically engineered crops in Bangladesh, according to Dr. Vijay Paranjape, of Sathguru Management, Ltd., one of the partners.

Mr. Mohammad Nazmul Islam, Additional Secretary, Ministry of Agriculture, chief guest of the closing session, chaired by Dr. Abul Kalam Azad, said, “Due to the efforts of our scientists, now we get many vegetables round the year. I personally visited many Bt brinjal fields and farmers are getting more price than other conventional varieties using the same production methods. We will adopt new innovations and will try to expand those through our extension systems.”

To date, several varieties of Bt brinjal have been approved in Bangladesh. The Feed the Future South Asia Eggplant Improvement Partnership is working with BARI to bring these varieties to Bangladeshi farmers. Bt brinjal significantly reduces insecticide use and improves the yields of smallholder farmers. The Feed the Future Biotechnology Potato Partnership is developing farmer-preferred potato varieties in Bangladesh that are resistant to late blight, a disease which can decimate entire crops, devastating local food supplies and farmers’ livelihoods. Feed the Future is an initiative of the United States Agency for International Development (USAID).

Mr. David Westerling, Deputy Director and the Feed the Future team lead, Economic Growth Office, USAID Bangladesh said, “In order to see it to adulthood and capitalise on its potential with the ultimate commercialisation of Bt eggplant and LBR potato, we need to continue to develop a comprehensive communications strategy and policy framework and educate the public on biotechnology’s contributions to creating an environmentally sustainable agricultural sector and food secure Bangladesh.”