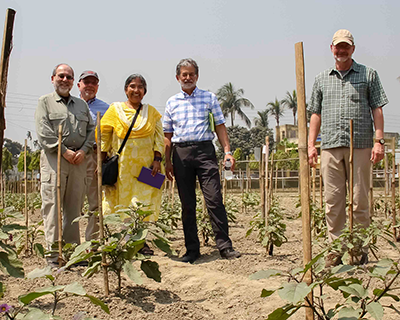 “There is no substitute for seeing crop production on the ground in-country when you are trying to evaluate a project,” said Joe Huesing, senior biotechnology advisor with USDA-ARS/USAID. “It’s a good opportunity to meet with scientists, farmers and policymakers to discuss successes, challenges and strategies for the future.”

Huesing, along with the other four members of the Technical Advisory Committee (TAC) of the Feed the Future South Asia Eggplant Improvement Project, visited Bangladesh from March 2024, 2016 to see Bt brinjal research and adoption.

Key activities included a visit to Bt brinjal fields at the Bangladesh Agricultural Research Institute (BARI) headquarters in Gazipur, and meetings to update the Honorable Agriculture Minister Begum Matia Chowdury, MP, Abdul Kalam Azad, the Executive Chairman of the Bangladesh Agricultural Research Council (BARC), and Kamal Uddin Ahmed, the Secretary of the Ministry of Environment and Forests, on project activities.

“The TAC’s first visit to Bangladesh helped members better understand Feed the Future South Asia Eggplant Improvement Project activities in Bangladesh,” said Tony Shelton, Cornell entomologist and international professor who is the project director. “TAC members were able to share their observations and findings with the BARI scientists and officials, and discuss ongoing and future activities with key project officials in Bangladesh.”

Bangladesh released four Bt brinjal varieties in October 2013. Before Bt brinjal, farmers had to spray pesticide 80-100 times each season to protect their fields from fruit and shoot borer infestation. Farmers threw away a major portion of their harvested brinjal caused by the waste of infested and damaged fruits. Farmers in Bangladesh have strongly accepted and cultivated Bt brinjal, as it requires no insecticide for the fruit and shoot borer insect, and allows them to sell 100 percent of the harvested crop.

In addition to Cornell University, partners in the project include the Bangladesh Agricultural Research Institute (BARI) and the University of the Philippines at Los Baños. As a staple crop, eggplant, or brinjal, generates income for smallholder farmers and is an important source of nutrition for farmers and consumers in South Asia.