Ansar Ali earned just 11,000 taka – about $130 U.S. dollars – from eggplant he grew last year in Bangladesh. This year, after planting Bt eggplant, he brought home more than double that amount, 27,000 taka. It’s a life-changing improvement for a subsistence farmer like Ali.

Bt eggplant, or brinjal as it’s known in Bangladesh, is the first genetically engineered food crop to be successfully introduced in South Asia. Bt brinjal is helping some of the world’s poorest farmers to feed their families and communities, improve profits and dramatically reduce pesticide use. That’s according to Tony Shelton, Cornell professor of entomology and director of the Bt brinjal project funded by the United States Agency for International Development (USAID). Shelton and Jahangir Hossain, the country coordinator for the project in Bangladesh, lead the Cornell initiative to get these seeds into the hands of the small-scale, resource-poor farmers who grow a crop consumed daily by millions of Bangladeshis.

Bt brinjal was first developed by the Indian seed company Mahyco in the early 2000s. Scientists inserted a gene from the bacterium Bacillus thuringiensis (thus the name, Bt) into nine brinjal varieties. The plants were engineered to resist the fruit and shoot borer, a devastating insect whose larvae bore into the stem and fruit of an eggplant. The insects cause up to 80 percent crop loss.

The Bt protein produced by the engineered eggplant causes the fruit and shoot borer larva to stop feeding, but is safe for humans consuming the eggplant, as proven through years of biosafety trials. In fact, Bt is commonly used by organic farmers to control caterpillars but has to be sprayed frequently to be effective. The Bt eggplant produces essentially the same protein as in the spray. More than 80 percent of field corn and cotton grown in the U.S. contains a Bt gene for insect control.

“Farmers growing Bt brinjal in Bangladesh are seeing three times the production of other brinjal varieties, at half the production cost, and are getting better prices at the market,” Hossain said.

A recent survey found 50 percent of farmers in Bangladesh said that they experienced illness due to the intense spraying of insecticides. Most farmers work in bare feet and without eye protection, leading to pesticide exposure that causes skin and eye irritation, and vomiting.

“It’s terrible for these farmers’ health and the health of the environment to spray so much,” said Shelton, who found that pesticide use on Bt eggplant was reduced as much as 92 percent in commercial Bt brinjal plantings. “Bt brinjal is a solution that’s really making a difference in people’s lives.”

Alhaz Uddin, a farmer in the Tangail district, made 6,000 taka growing traditional brinjal, but had to spend 4,000 taka on pesticides to combat fruit and shoot borer.

“I sprayed pesticides several times in a week,” he said. “I got sick many times during the spray.”

Mahyco initially wanted to introduce Bt brinjal in India and underwent years of successful safety testing. But in 2010, due to pressure from anti-biotechnology groups, the Indian minister of the environment placed a moratorium on the seeds. It is still in effect today, leaving brinjal farmers there without the effective and safe method of control available to their neighbors in Bangladesh.

Even before the Indian moratorium, Cornell scientists hosted delegations from Bangladesh that wanted to learn about Bt brinjal and the Agricultural Biotechnology Support Project II (ABSP II), a consortium of public and private institutions in Asia and Africa intended to help with the commercial development, regulatory approval and dissemination of bio-engineered crops, including Bt brinjal.

Cornell worked with USAID, Mahyco and the Bangladesh Agricultural Research Institute to secure regulatory approval, and in 2014 the Bangladeshi government distributed a small number of Bt brinjal plants to 20 farmers in four districts. The next year 108 farmers grew Bt brinjal, and the following year the number of farmers more than doubled to 250. In 2017 the number increased to 6,512 and in 2018 to 27,012. The numbers are likely even higher, according to Shelton, as there are no constraints against farmers saving seeds and replanting.

”Farmers who plant Bt brinjal are required to plant a small perimeter of traditional brinjal around the Bt variety; research has shown that the insects will infest plants in the buffer area, and this will slow their evolutionary development of resistance to the Bt plants. 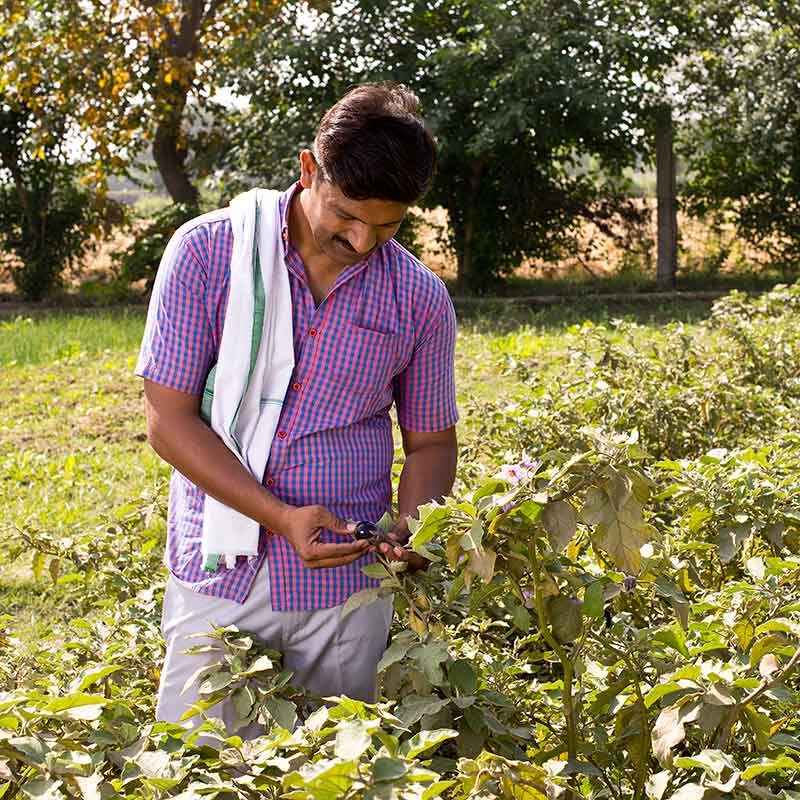 “We will be guided by the science-based information, not by the nonscientific whispering of a section of people,” Chowdhury said. “As human beings, it is our moral obligation that all people in our country should get food and not go to bed on an empty stomach. Biotechnology can play an important role in this effect.”

Krisy Gashler is a freelance writer for the College of Agriculture and Life Sciences.